The “core” message of Christianity is a message of love and redemption, salvation and hope. It is the message of the person of Jesus Christ, 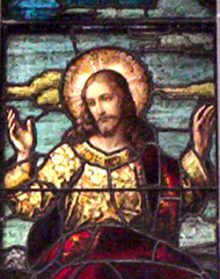 who walked this earth 2000 years ago. To know and understand the Christian faith one must know Jesus, in his person, words and deeds. Knowing Jesus, however is more than just knowing “about” him. A Christian is a follower of Christ. This means believing in Jesus, entrusting your whole life to him, and following him in every area of your life.

(This picture is taken from a stained glass window in St. Mary’s Cathedral Basilica of the Assumption, which serves as the seat of the Roman Catholic Diocese of Covington, Kentucky.)

“The essence of Christianity is not an idea, not a system of thought, not a plan of action. The essence of Christianity is a Person: Jesus Christ Himself. That which is essential is the One Who is essential. To become truly real means to come to know Jesus Christ and to learn from Him what it means to be human.”
~Joseph Cardinal Ratzinger (now Pope Benedict XVI)

The Christian message is called the “gospel” of Jesus Christ. “Gospel” literally means “good news.” To understand this “good news,” we must first recognize the needy condition of mankind.

Our world has gotten off-course. It is not hard to see that something has gone terribly wrong – that we do not live as God originally intended when he created the world as an expression of his love. We also discover that we cannot save ourselves no matter how hard we may try to eradicate poverty or disease or protect ourselves from war. We simply cannot save ourselves and we need divine intervention to have God’s loving purpose for this world restored. We need a savior.

Without God’s help, we will all die in our sinful condition and remain separated from God forever. The good news of Christianity is that God has sent his Son Jesus to save us from this condition of alienation from God and his loving plan for our lives. When we believe in and accept Jesus, our Savior, and follow God’s loving plan for our lives, not only are we promised eternal life in heaven after we die, but God actually provides us with his grace (supernatural help) to restore and transform our lives so that we can live the way we were meant to live – in loving communion with our God and our fellow man. In order to better understand the Christian message, we need to know more about who Jesus is, what he has done for us and how he has called us to follow after him.

Christians believe that Jesus was the fulfillment of long awaited prophecies of the Jewish religion. Central to this believe is the claim that Jesus was both God and man, and that he was, and is still today, the Savior of the world. Christians believe that accepting or rejecting Jesus, and his message of love and redemption, can affect our eternal destiny. These are bold claims. Are they true? What could it mean for our lives if they are? 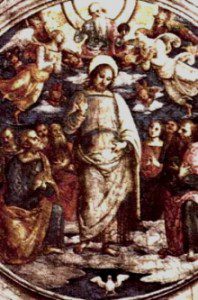 Historical evidence supports the idea that Jesus is in fact a real historical person. It also supports the fact that he claimed to be not only a man, but God as well. It is hard to ignore someone who claims to be God – the same God who created the universe! This is the type of claim which prompts a response. People today, who claim to be God, are usually labeled as being insane. The people of Jesus’ time responded to Jesus’ claim to be God by hanging him on a cross to die as a criminal!

If in fact Jesus made this claim, logic would suggest only three possibilities:

This simple logic compels us to make a decision to either accept or reject the person of Jesus Christ and his gospel (message of good news). Once one understands the bold claims made by Jesus, it is difficult to maintain that Jesus was merely a good person or a good prophet; but not what he claimed to be. Jesus claimed to be both God and man. He claimed to be the savior of the world. Either what he claimed is true or it isn’t. If we believe that his claims are true, then we would be foolish not to follow him!

This picture is taken from a stained glass window in St. Mary’s Cathedral Basilica of the Assumption

“In the end, Christian faith is simply faith in God. Everything else is an unfolding of that. Our faith is not a theory but an event, an encounter with the living God who is our Father, who in his Son Jesus Christ has assumed human nature, who unites us in the Holy Spirit and who, in all this remains the one and only God.” ~Joseph Cardinal Ratzinger (now Pope Benedict XVI), Gospel Catechesis Catechism, p. 18.

One of the evidences for the validity of the message of Jesus Christ is that he did something no one has ever done before or since. He rose from the dead! Never before in the history of mankind have there been such signs and wonders are were done by Jesus Christ in a public manner for all to see. The blind, deaf and lame were healed and the dead raised to life!

The gospel message (or “good news”), which Jesus Christ gave to his followers, is also referred to as the “deposit of faith.” For if this message came from Jesus, who was God, and is so important that it can affect our eternal destiny, it must be safeguarded for future generations. This is why it is called the “deposit of faith.” St. Paul told Timothy to “guard” the true faith that had been entrusted to him so that people might not be lead astray (see 1Tim 6:20-21).

But how did Jesus give this message to his followers and how has it been handed down to us 2000 years later? What he did in fact, was to commission his closest followers (called Apostles) to spread this message to all mankind. He gave them his divine authority and power and established them as the leaders of his church. He gave them a divine promise to be with them and to protect his church. They acted in his name in leading his church and they worked miracles just as he had.

In order to fulfill the command of Christ to carefully preserve his message and spread it to everyone, the Apostles established other men in the authority of Christ (which had been given to them) to lead his church. These were called bishops and are the successors of the Apostles.

The followers of Christ became known as Christians and after a short period of time this church began to be referred to as the “catholic” (which means “universal”) Church. All Christians belonged to what has now became known as the Catholic Church.

Catholics believe that the Catholic Church, which has an unbroken line of succession back to the first Apostles of Christ, most fully represents and preserves not only this “deposit of faith” (the teachings of Christ), but also the teaching authority of Christ which he passed on to his Apostles. The Catholic Church also believes however, that all Christians who follow the teachings of Christ and who have been baptized according to the command of Christ, are part of this same Church in a mystical way even if they do not consider themselves to be Catholic. We refer to non-Catholic Christians thus as our “separated brothers and sisters.”

Jesus established his Church when he gave his authority to his Apostles and instructed them to pass on his Gospel message of good news (the deposit of faith) to all mankind. After a few centuries however, the leaders of this Church decided that some of the early writings of the followers of Christ should be collected and given special reverence as a sure standard of this deposit of faith. They could only presume to do this because they were the successors of the Apostles and had thus been given the authority to act in the name and authority of Christ. We call this collection of writings the New Testament of the Bible.

To examine the “heart” of the Gospel message of Christianity (the central beliefs of those who follow the teachings of Jesus Christ), click on Answers to Life’s Difficult Questions. For a brief explanation of the Catholic Church, click on Pillar of Fire, Pillar of Truth. For a more comprehensive explanation of Christian beliefs in an organized format, refer to the Catechism of the Catholic Church. To read the inspired Word of God which remains the solid norm for all Christians, turn to the Holy Bible. To read the story of Jesus Christ as recorded in the Bible, read the Gospel according to Matthew, Mark, Luke, or John.