“Every age has its own outlook… (and is) especially liable to make certain mistakes… We may be sure that the characteristic blindness of… (our) century—the blindness about which posterity will ask, ‘But how could they have thought that?’—lies where we have never suspected it, and concerns something about which there is untroubled agreement between (even people who have opposite viewpoints on everything else).”  C. S. LEWIS, The Value of Old Books

I think the question of modest attire and what we should wear at Mass touches on one of the characteristic blindnesses of our age.

Scripture cautions us to not reject off hand something that does not make sense to us:

“Do not rely on your own insight… Be not wise in your own eyes.” Proverbs 3: 5,7
“Do not be conformed to this world but be transformed by the renewal of your mind.” Romans 12:2

Let us look to the Church, Mary and the saints, previous generations, and the words of Jesus in Sacred Scripture to help us to form our conscience in this area. 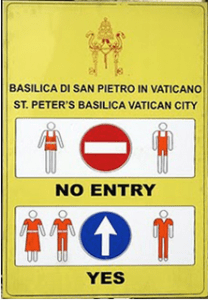 In addition, men should remove their caps/hats and wearing leggings as pants is never acceptable in church.

This picture shows what is allowed and not allowed at St. Peter’s Basilica in Rome.  This gives us an idea of the minimum expectation for modest attire for Mass.  The articles linked below offer some additional worthy points to consider.

Simply put, when we come to worship the living God, shouldn’t we dress better than we do for a picnic or a ball game?

A renewed sense of the sacred will help us to understand why we do not talk, dress and act in church as we would in a social hall or at our own homes.

The Mass is the Wedding Feast of Jesus, the King of the Universe, with us, His bride. It is also the Memorial Celebration of His death. People dress up for weddings and funerals because these are solemn occasions where people wish to show their love, respect and honor in a special way. Dressing up for Sunday Mass shows that we understand the true nature and solemnity of this celebration, which is the foundation, source, and summit of our Christian life. Dressing up for Sunday Mass shows our love, respect and honor for God. If you wouldn’t think of wearing something to a wedding or a funeral, you probably shouldn’t wear it for Sunday Mass.

What Catholic Popes, Cardinals and Bishops have said about what to wear at Mass

INTERIOR vs. EXTERIOR: what we do with our bodies reveals what we hold in our hearts

Sometimes people will say that it doesn’t matter what we are wearing on the outside but what is in our heart that matters. While having the ring of truth, this line of thinking overlooks that we are not merely spiritual beings. Rather, we are both body and soul and what we do with our bodies reveals what we hold in our hearts. Padre Pio, who had the gift of reading people’s hearts, explained that what is worn on the exterior of a person reflects their interior disposition. While there are certainly times when one cannot choose what they wear, there are certain minimums that should be maintained, especially when we come to church. Bear in mind that the priest covers himself from his neck, to his wrists, to his ankles when he says Mass.

WHAT WOULD JESUS DO?

Some people suggest that Jesus is not concerned with how people dress when they come to Mass and that if He were here in person, He would welcome everyone, no matter how they were dressed. St. Pio of Pietrelcina however, paints a different picture. He had very strict requirements for both men and women who wanted to enter church and said that it was Jesus himself who required this. He would even refuse absolution to those improperly dressed. When questioned on this he said:

“It is Jesus who tells me how I am to deal with people.” “Don’t you know, what pain it costs me to shut the door on anyone? The Lord has forced me to do so. I do not call anyone, nor do I refuse anyone either. There is someone else who calls and refuses them. I am His useless tool.”

The only time in the Bible where Jesus became violent was when he drove the money changers out of His Father’s House using a whip of cords and turning over tables. (John 2: 13-17)  He thus fulfilled the prophecy of Psalm 69, which says: “Zeal for your house will consume me.”

If we take seriously our Lady’s warning at Fatima that “Certain fashions will be introduced that will offend Our Lord very much” then we might consider that it would be even more offensive to Our Lord if these same immodest fashions are worn in church.

What would Jesus do? Consider the example used in this parable that Jesus told to His disciples:

“The kingdom of heaven may be compared to a king who gave a marriage feast for his son… But when the king came in to look at the guests, he saw there a man who had no wedding garment; and he said to him, `Friend, how did you get in here without a wedding garment?’ And he was speechless. Then the king said to the attendants, `Bind him hand and foot, and cast him into the outer darkness; there men will weep and gnash their teeth.’ For many are called, but few are chosen.”  Mt 22:2,11-14

In this parable the person who comes to the Royal Wedding Feast improperly dressed is like one trying to enter Heaven with unrepentant mortal sin on their soul. Jesus chose this image because those of his day would have understood how offensive it would be to a king for someone to come to his son’s wedding dressed inappropriately.

Why then would we not want to dress up for the Mass, which is the Divine Wedding Feast of the Lamb of God, where Jesus, the Bridegroom, offers His Body to His bride, the Church?! If you will not dress up out of love and respect for God, at least consider that you do not want to offend Him by how you dress for His Son’s Wedding Feast!

Worship the Lord in Holy Attire: (a distinction must be made between poverty and laziness)

“To the homeless man who comes in from the street in his poor clothing, we say ‘Welcome.’ To the person who rushes over after work and hasn’t had a chance to change, we say, ‘No problem, (as long as you are dressed modestly).’ But, to the people who get dressed on a Sunday morning knowing they are coming to Mass, we say, please, please, please, ‘Worship the Lord in holy attire!’ God is worth it!” (Rev. T. G. Morrow)

Modesty at Mass is a Must

Mary, mother of our Divine Savior, in your tender love, help us to dress in a manner worthy of the dignity of the Eucharistic Wedding Feast of your Son, Jesus.

Gents, Let’s Dress up for Mass!