Dear Parishioners of Divine Mercy and St. Bernard parishes, I am honored to be your pastor! I am inspired by the rich history of faith of both of Divine Mercy (Sacred Heart & St. Anthony) and St Bernard, and I hope to continue to get to know each of you better. Please feel free to invite me to your home or set an appointment to meet me at my office.  If you are considering joining either of our parishes, I would look forward to meeting with you personally.  Here is some information about my background.

I grew up on a farm near Fairborn, OH in a devout Catholic family where I was the youngest of seven (5 boys and 2 girls).

As of 2014, I had 19 nieces and nephews, 12 great nieces and nephews and 3 more on the way (I need to update these numbers)! We raised hogs (about 6,000/year) and crops. When I was younger we also raised some sheep, which we later replaced with 18 head of beef cattle. Although I was active in 4-H for 10 years and was elected county 4-H king, I chose not to become a farmer and was uncertain of what I wanted to be when I grew up.

My father met St. Pio in Italy during his service in World War II and I think this contributed to the germination of my own priestly vocation – even before I was born.

This encounter strengthened my father’s desire to go to daily Mass. Attending daily Mass was not always easy for a farmer raising 7 children, but he always found time for it – usually early in the morning, at the start of his day. From the beginning of their marriage, my parents agreed in prayer together to ask God to give them a son who would become a priest. I owe my vocation in large part to their prayers and example of Catholic life.

In high school, I had a profound experience of God’s love through the Charismatic renewal. This led me into a deeper experience of my faith and gave me a strong desire to share God’s love with others. In college, I began my studies at the University of Dayton, OH majoring in Physics. I chose this major because I had enjoyed math and science in high school. After a year however, I switched to Psychology, thinking that I would enjoy working with people. Then I added Theology as second major and switched schools. At my new college, I proceeded to drop Psychology and add French as my second major. (I had been taking French since High School.) I graduated from Franciscan University in Steubenville, OH with a double major in French and Theology in 1981.

Still not certain of what I wanted to do, I went into sales. After a couple years of selling office equipment in Dayton OH, I moved back to Steubenville, OH where I was part of a lay community of the Catholic Charismatic renewal. I initially tried to open my own office selling office equipment as an offshoot of another company, but after a year and a half, I left this venture to accept an offer to buy a business forms distributorship. This business grew three-fold in sales before I sold it ten years later. During this time, I bought a house – a duplex with a garage apartment. I lived on one side and rented the other side and the garage apartment. I enjoyed doing my own repairs and being a part-time landlord. During my time in Steubenville, I remained very active in the Church. For three years, I volunteered as a part-time, instructor/trainer for a Catholic school of Evangelism that trained people for home visitation. 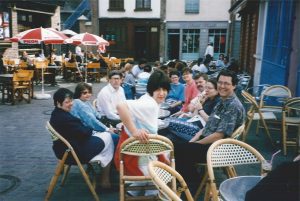 After selling my business in Steubenville, I moved to France in 1997 to volunteer as a member of a L’Arche community, sharing life in a household

with people who have a mental disability. After my initial year as a volunteer, I decided to say on and was asked to head up one of the households, overseeing the final construction of a new, ten person residence.

This experience of sharing community life with those who have a mental handicap was a wonderful and profound experience that, I believe, help to prepare me for my vocation to the priesthood. 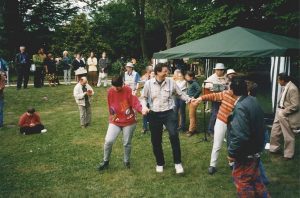 I stayed on in France with the L’Arche community for three years and, during that time, worked with L’Arche volunteers from many different countries (France, Germany, England, Canada, Brazil, Belgium, Poland, Czech Republic, Latvia, Lithuania, Holland, Sweden, Lebanon, Egypt, the Island of Mauritius, the former republic of USSR Georgia, and Ethiopia…

It was a rich experience to work alongside of people from so many varied cultures.

I also  enjoyed traveling throughout most of central Europe during that time. Upon returning to the States, I began to consider what I would do next.

Because of my interest in ministering to people, the idea of “lay pastoral ministry” was suggested to me by a priest friend. When I consulted with Msgr. Foys of Steubenville, OH, he told me that everything I wanted to do as a lay pastoral minister I could do more effectively as a priest. At that time however, I was not convinced that I was being called to be a priest. But I did find a good position as a lay pastoral minister in Dayton Ohio, close to where I grew up. While continuing to rent out my house in Steubenville, I moved into the upstairs of a rectory in Dayton, OH to work as a lay pastoral minister for four small Catholic parishes that were all under one pastor: Our Lady of the Rosary, St. Adalbert, St. Stephen and Holy Cross. They were all located in the “Old North Dayton” neighborhood within a mile and a half of each other, in a setting not unlike Bellevue and Dayton, KY.

During the two years that I served in this capacity, I would from time-to-time recall the words of Msgr. Foys to me that I could do all of these things better if I were a priest. I also became increasingly aware that I found this ministry very fulfilling. By coincidence, after my first year as a lay pastoral minister, Msgr. Foys was ordained Bishop of Covington, which is only an hour away from where I was working in Dayton, OH. After re-contacting Bishop Foys, and talking more with him, I began to see more clearly that the things I most enjoyed doing are exactly what a priest does every day! Through his encouragement I entered St. Vincent Seminary in Latrobe, PA. I sold my house in Steubenville, one year before I was ordained a priest on May 16, 2008, shortly before turning 50.

My first assignment was a year as parochial vicar of St. Joseph in Cold Springs, KY. Then, for five years, I was pastor at Sts. Peter and Paul, in California, KY. For the last two of these years, I was also chaplain for Bishop Brossart High School.  In 2014, I was assigned as pastor for Divine Mercy and St. Bernard.

I am deeply grateful for the warm welcome that was shown to me on of my arrival here and enjoy this opportunity to be a part of the communities of Divine Mercy and St. Bernard! I am humbled to be your pastor and will look to you for your advice and assistance in caring for the mission entrusted to us by Jesus – to make His Kingdom known here on earth, in our local communities.

Please pray for me that I will be a good, holy and wise pastor, and know that I hold all of you in my prayers each day.