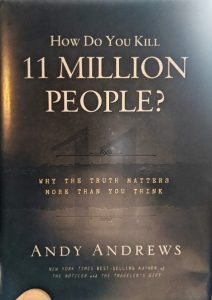 This is a title of a small book written by Andy Andrews. This is a recap of some of the ideas he presents about how, between the years 1933 and 1945, Adolf Hitler was able to kill 11 million people in concentration camps.

The author asks, “why, for month after month and year after year, did millions of intelligent human beings – guarded by a relatively few Nazi soldiers – willingly load their families into tens of thousands of cattle cars to be transported by rail to one of the many death camps scattered across Europe?”

How do you kill 11 million people? The author gives a simple answer: “Lie to them.”

Adolf Eichmann was the mastermind of this evil. “An intricate web of lies, to be delivered in stages, was designed to ensure the cooperation of the condemned (but unknowing) Jews.” First, barbed wire fences were put up around entire Jewish neighborhoods as a “temporary necessity of war” with the promise that no harm would come to those inside the fence. Then bribes were accepted from the Jews to ensure that they would receive better living conditions, again with the promise that the situation was temporary and no harm would befall them.

“Finally, Eichmann would appear before a gathering of the entire ghetto. accompanied by an entourage of no more than 30 local men and officers of his own – many unarmed – he addressed the crowd in a strong, clear voice. according to sworn statements, these were very likely his exact words:

‘Jews: At last, it can be reported to you that the Russians are advancing on our eastern front. I apologize for the hasty way we brought you into our protection unfortunately there was little time to explain. You have nothing to worry about. We want only the best for you. You will leave here shortly and be sent to very fine places indeed. You will work there, your wives will stay at home, and your children will go to school. You will have wonderful lives. We will all be terribly crowded on the trains, but the journey is short. Men? Please keep your families together and board the rail cars in an orderly manner. Quickly now, my friends, we must hurry!’

The Jewish husbands and fathers were relieved by the explanation and comforted by the fact that there weren’t more armed soldiers they helped their families into the rail cars the containers, designed to transport eight cows, were each packed with a minimum of 100 human beings and quickly padlocked.

At that moment they were lost. The trains rarely stopped until well inside the gates of Auschwitz (or one of the other concentration camps).”

But it wasn’t just Jews. Almost half of those exterminated were not Jewish. They were composed of gypsies, Jehovah’s witnesses, Catholic priests, Christian leaders who resisted the government, vagrants, those who had moved to Germany from other countries, members of trade unions, political non-conformists, common thieves and other offenders. Many of these non-Jews had stood by and done nothing as the Jews were herded away, not knowing that they would be next.

People didn’t want to believe the horror of the rumors they heard about what was happening.

“And at least one German town the railroad tracks ran behind the church. An eye witness stated:

‘We heard stories of what was happening to the Jews, but we tried to distance ourselves from it, because we felt, what could anyone do to stop it?

Each Sunday morning, we would hear the train whistle blowing in the distance, then the wheels coming over the tracks. We became disturbed when we heard cries coming from the train as it passed by. We realized that it was carrying Jews like cattle in the cars!

Week after week the whistle would blow. We dreaded to hear the sounds of those wheels because we knew that we would hear the cries of the Jews en route to a death camp. Their screams tormented us.

Years have passed and no one talks about it now, but I still hear that train whistle in my sleep.'”

In 1945, at the height of its political power, the Nazi political party boasted only 10% of the German population. What about the other 90%?

“Hitler said, ‘Make the lie big, make it simple, keep saying it, and eventually they will believe it.'”

The point that the author makes is that truth matters. Vigilantly pursuing the truth can help us avoid being led in a direction that will lead to our destruction. We must be careful to sift through what we are told by political leaders (and I would add, “by the media”) and “never stop looking for the truth.”

He also clearly states his own political agenda in writing this book, saying:

“I want America’s present and future leadership to embrace and live up to America’s core principles as written by our Founding Fathers and set forth in our Constitution. In addition, I want the public to vigilantly hold them accountable for doing so.”

Now, here is my commentary. I found this little book very compelling.

There are a lot of accusations of lying on both sides of the political spectrum.  One of the titles of Satan is “Father of lies.” Whereas Jesus says He is the “Truth” and the Truth shall set us free. Jesus said that Satan is the prince of this world and a “thief and a murderer.” So, the question is: what are the lies that are being fed to us? Do we believe everything we are told by the media?

When you have a media news agency that is consistently promoting the intrinsic evils of abortion “rights,” homosexual unions, gender confusion and which criticizes Church organizations and Christians for “hate speech” and “discrimination” merely when they try to live their faith in their day-today lives, is it possible that this new media agency is under the influence of the “prince of this world”? (I can think of several news agencies that fit this description.) Why would you consider this kind of news agency a source of objective news about current events or political candidates? And if you watch this kind of news reporting as your regular source of news, are you not forming your mind with exactly what the prince of this world wants you to think?

Where do we go for the truth? Do we fact check what we are told? Is there an agenda and a master mind behind certain lies that are intended to lead to the death of millions, as was the case with Adolf Eichmann? Is there a difference between spontaneous lies one tells to make one’s self look good, verses deliberately crafted lies that are part a larger evil? This is what we must try to sort out if we do not wish to repeat the errors of history. We should choose our sources of information carefully. We should avail ourselves of good Catholic news reporting like Catholic News Agency, EWTN,  or National Catholic Register. We also need to study the truths of our Catholic Faith so that we can make proper judgments in matters that concern the common good.

“Do not be conformed to this world but be transformed by the renewal of your mind, that you may prove what is the will of God, what is good and acceptable and perfect.” Romans 12:2