Each year, since 2012 the United States Bishops have called for a “Fortnight for Freedom,” a fourteen day period from June 21 to July 4, to call attention to the threats facing Religious Liberty in our country.  During this time we are encouraged to respond with prayer, education and action.  This time period celebrates on our liturgical calendar a series of great martyrs who remained faithful in the face of persecution by political power—St. Thomas More and St. John Fisher, St. John the Baptist, SS. Peter and Paul, and the First Martyrs of the Church of Rome.

The Pattern of Religious Persecution

18th – 19th Century Religious Persecution in Ireland
“[T]he penal laws discriminated against their every right – the right to worship, congregate, own property, to speak their language – every vestige of dignity was stripped away and the groundwork was done to ensure that the famine of the 1840s would claim more than a million lives.”

19th Century Religious Persecution in Germany
Many Immigrants came to America fleeing Religious Persecution.  In Germany (1871-87) there was a period referred to as Kulturkampf.  This was a “culture war” against the Catholic Church, the beginnings of which are somewhat similar to the current political climate in the United States today.

Your Faith is Being Rewritten
Religious Liberties.org
United States Conference of Catholic Bishops
First American Freedom
Catholics Called to Witness
Women Speak for Themselves
Stand Up for Religious Freedom Rally
News Updates on the HHS Mandate

Is the HHS Mandate issue about Contraception or Religious Liberty?

Although the HHS Mandate issue involves the topic of contraception, it is primarily a Religious Freedom issue. The Religious Liberty Links above offer resources that explain this in greater detail. It is also important to note that abortion inducing drugs are also part of the HHS mandate.

An excerpt from Archbishop Lori’s May 24, 2012 keynote address at the national Religious Freedom Conference in Washington, D.C.

The nation’s first bishop, John Carroll… was a cousin of Charles Carroll, a signer of the Declaration of Independence. Charles Carroll’s story – and indeed Maryland’s early history – teaches us about the fragility of religious liberty and the importance of exercising vigilance in protecting it.

Maryland was founded in the mid-17th century by the Catholic Lord Baltimore as a society where people of different faiths could live together peacefully.

This vision was soon codified in Maryland’s 1649 Act Concerning Religion (also called the “Toleration Act”), which was the first law in our nation’s history to protect an individual’s right to freedom of conscience.

Maryland’s experiment in religious toleration, however, ended within a few decades. Around the turn of the 18th century, the colony was placed under royal control, and the Church of England became the established religion. Discriminatory laws, including the loss of political rights, were enacted against those who refused to conform. Catholic chapels were closed, and Catholics were restricted to practicing their faith in their homes. The Catholic community lived under these conditions until the American Revolution.

Both Charles Carroll and his father, although wealthy landowners, were barred from active participation in politics because of their Roman Catholic faith. Despite this legal restriction, in the early 1770s, Charles Carroll became a powerful voice for independence from British rule.

He eventually was elected to represent the colony of Maryland in various committees and was selected as a delegate to the Continental Congress in 1776.

Carroll then signed the Declaration of Independence & was the only Catholic to do so.

Just a few years later, our Founding Fathers included protection of the free exercise of religion in the First Amendment to our Constitution. In reflecting on his time in the Constitutional Convention, George Washington stated in 1789, “If I could have entertained the slightest apprehension that the Constitution framed in the Convention, where I had the honor to preside, might possibly endanger the religious rights of any ecclesiastical society, certainly I would never have placed my signature to it.” [Letter to the United Baptist Churches in Virginia, 1789]
Washington went on to state, “[I]f I could now conceive that the general government might ever be so administered as to render the liberty of conscience insecure, I beg you will be persuaded that no one would be more zealous than myself to establish effectual barriers against the horrors of spiritual tyranny, and every species of religious persecution.” [Ibid.]

Twenty years later, in 1809, another of our Founding Fathers, Thomas Jefferson, emphasized the value of freedom of conscience when he stated that “No provision in our Constitution ought to be dearer to man than that which protects the rights of conscience against the enterprises of the civil authority.” [Letter to New London Methodist, 1809] 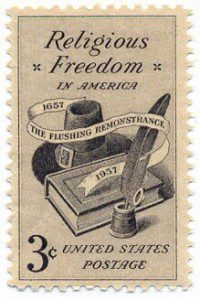 In 1957 the United States Postal service issued a postage stamp celebrating “Religious Freedom in America.” It commemorated the 300 year anniversary of an event in early American history that served to help formulate the principle of Religious Freedom that would later be enshrined in the Bill of Rights of our Constitution. The event this postage stamp commemorated was the signing of the Flushing Remonstrance in 1657.

Religion is both an intensely private part of our lives and a very public one at the same time. There is the inner spirit that drives us to believe or not to believe. For centuries, governments and rulers have attempted to control what people are allowed to believe and how to manifest it.

The Flushing Remonstrance of 1657

In 1657, with the signing of the Flushing Remonstrance, 30 brave colonists of Dutch controlled New Amsterdam, risked fines, prison, and banishment, in order to reject religious persecution and declare that the town of Flushing (now part of Queens, New York) open to all faiths to worship freely. This was in response to their governor’s banning the Quakers from his town and establishing the Dutch Reformed religion as the only religion that could be publicly practiced.

In 1656 William Wickenden, a Baptist minister from Rhode Island, was arrested by Dutch colonial authorities, jailed, fined, and exiled for baptizing Christians in Flushing. John Bowne was arrested in 1662 and banished from the colony for allowing Quakers to meet in his house. He was put on a ship to sail “wherever it may land.” That turned out to be Ireland. Many similar incidents took place, including the imprisonment of several of the signers of the Flushing Remonstrance. This 7 year period of religious intolerance ended in 1663 when the Dutch West India Company of Holland responded to an appeal by John Browne by issuing a letter of rebuke to the governor of the colony in the town of flushing.

Religious freedom was thus secured through the initiative of courageous citizens who took a stand against religious intolerance by signing the Flushing Remonstrance, which is recognized as the earliest political assertion of freedom of conscience and religion in New York.

Congress shall make no law respecting an establishment of religion, or prohibiting the free exercise thereof; or abridging the freedom of speech, or of the press; or the right of the people peaceably to assemble, and to petition the government for a redress of grievances.